One of many challengens when it comes to creating a new world, inventing a new world even, and especially a fantasy world, is that ordinary things might not operate the way we’re used to here… I really wanted Ember’s and King Magmus’s world to have a communication system (well, the fact that I’m a tech geek might have influenced this bit), however, I also wanted it to be a little fun. So, then came the Salamander Messaging System.

Whenever you need to send a note quickly to someone in the Kingdom of The Eternal Flame you simply summon a cute little salamander – and they do come in many colours too. Honestly, I wish we had the Salamander Messaging System here too. It would be awesome!

Just as Ember was about to push her front door open and leave, a small fiery vortex appeared above her small foyer table. She tried, quickly, to clear it somehow, trinkets and treasures tumbling off the edge despite her care. A bright green salamander popped out of the vortex, let out a squeaky sort of noise and produced a neatly folded note. It shook one of its feet in irritation and Ember noticed a small twig stuck between its toes.

If salamanders have toes.

Ember carefully extracted this twig, rolling it curiously between her fingertips. There was something remarkable about it. Was it the way it bent? Slightly crooked. It must be pine, she concluded. The salamander gave an impatient huff and Ember snapped out of her reverie and collected the note.

It was a message from Red, Ember’s best friend. They were going to the final night of the Fire Festival together. The festival lasted a full five days and nights, ending with a big finale of fire festivities and numbers. But Ember was growing more and more impatient with the commotion caused by the event. It was noisy and disturbed her peace. She could not roam unnoticed as she would prefer with curious elementals everywhere.

Just leaving my cave, she added to the note, refolded it, and handed it back to the waiting salamander.

In a blink of an eye, the salamander had leapt back into the vortex and was headed back to Red. She knew to not make it wait too long before sending a reply. Salamanders didn’t hover without treats.

The messaging service was a new magical trick that the younger generations had adapted to quickly. It was fuelled by the volcano’s magic and came in pretty handy. Ember only used it with her best friend Red and occasionally her siblings. Her mother kept complaining of nearly getting a heart attack every time she or her siblings sent her a salamander note. It was the thin tail; so she told them. It was too strongly reminiscent of snakes.

Ember secretly liked all things scaly and thought salamanders were the cutest of creatures. Their coal black or bronzy eyes peering back at her curiously whenever she summoned them.

Whoever had engineered this magical system had definitely exceeded any previous method of communication. It didn’t extend beyond the borders of their relatively small volcano kingdom, but she had heard gossip about extravagant investments.

At least this seemed to be the opinion of the shoppers at the local market.

Ember welcomed innovation and new opportunities, as long as they didn’t entail more socialising at her end, introverted as she was.

Messaging was a nice way to avoid meeting. 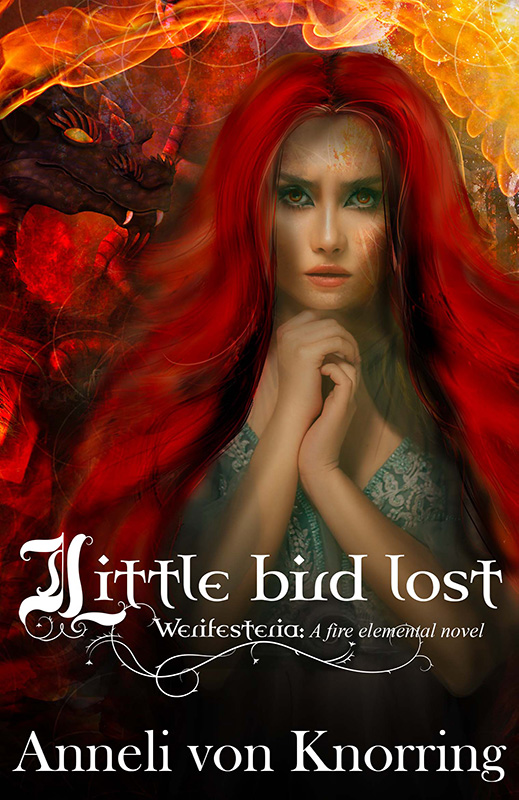 When there’s a storm, ground yourself. Find your inner strength.

The first novel in the fantasy Werifesteria Elemental Series, inspired by the Scandinavian nature, myths, folklore and Norse mythology.

Ember knows she must do something vitally important, but she is not sure what it is. For too long she has been hiding in her home cave, keeping herself to herself, and trying to avoid the expectations of others. If only her fire elemental powers would manifest. But strange things are happening in the volcanic Kingdom of the Eternal Flame, and the handsome Dragon King Magmus insists that what she’s doing is important – even if it’s just collecting twigs in the forest. Too many mysteries are confusing them both and there’s a threat to the entire elemental realm. Ember battles with her anxiety, high sensitivity and empathic nature. If only she could believe in herself as much as King Magnus does.

Will she and King Magmus work out what to do in time? Especially when the Fire Council seem convinced Ember is the key to saving the realm.

Or put it in your Amazon shopping bag.