The raven in her heart

The raven in her heart, Werifesteria Elemental Series 0 comments

It was unintentional… Really, it was.

That the two first books in the Werifesteria Elemental Series should be fire and ice. This is a bit funny because the series is inspired by Norse mythology and the Scandinavian folklore and landscape. If you’re not familiar with Norse mythology then let me explain.

“I remember nine worlds, nine giantesses, the mighty tree, before the ground below.
First was the world in the south, which is named Múspell. A region of scorching heat, ablaze with fire. It is impassable to those who are outlanders and do not have holdings there.”

So, fire and ice – these are the two first worlds on the great world tree Yggdrasil.

And I promise, I didn’t think about this at all as the first book in the Werifesteria Elemental Series took form: Little bird lost. Then came the winter tale, ice: The raven in her heart. But it is very suitable.

Here’s a snippet from The raven in her heart and we find the main character, Venla, in a snow storm:

It was getting dark, and the storm strengthened by the minute, snowflakes moving towards the windscreen menacingly and in great numbers, creating stripes in the air as they fell, making it difficult to see the road ahead. Her tears didn’t assist visibility. The temperature had dropped, and the previously mushy snow was quickly becoming treacherous ice. More than once, she had felt her winter tyres lifting from the road, sliding the back of the car momentarily out of her control. Her fingers clutched the steering wheel, turning her knuckles white. Her breathing was ragged – whether out of fear or still catching from her lingering sobs she wasn’t sure. It didn’t really matter. Right now, she had to focus on getting to the cabin. Her aunt had gifted it to her before she died – in an attempt to circumvent Venla’s mother, who always claimed to be doing the best for her, but as reality came crashing in she knew this was far from the truth. According to her therapist – not that she spoke to him often – it was her mother who had kept tearing her down and creating her insecurities. The latter had ruined her marriage. For a few months now she had felt like the stupidest person in the world. It was harsh, yes, but how else could she explain how she could never do anything without asking her mother’s permission? And she was a grown woman now, well past thirty. Today she had done the first thing ever without consulting her mother. She should feel proud, but she felt wretched and nauseous. She had signed the divorce papers and posted them to the lawyer – not because she wanted to, but because her now ex-husband wanted her to. She had thought it all a joke when he told her. But when he moved out to live with his new girlfriend it became painfully obvious. That hateful therapist had torn their marriage apart – until there was nothing left – until it was disturbingly evident that her ex-husband had never, ever loved her. He had, much like her mother, made her feel that she was never enough, that nothing she did was ever done well enough – and she’d kept on trying and trying until her self-worth had been completely decimated. What kind of person would let others treat her like that? It felt as if she’d been betrayed by the very people who should have cared for her; allowing them to abuse their power over her. Remembering clearly how her ex-husband had surprised her at their favourite ski resort by asking her to marry him – he later made it sound as if he had married her because she wanted it. Sadness welled up in her, thinking back to that day and realising he had been playing her – and perhaps himself too – what did she really know?

She wasn’t sure what she was grieving over more – the failed marriage, the humiliation, the final death of all the lies she had told herself, her bitter confrontation with her mother, all that should have been, but never was – or perhaps all of it.

The car suddenly spun out of control as a sharp turn surprised her. She wasn’t moving fast, closer to the speed of a mechanical slug, yet still she screamed as the car twisted this way and then that, until it came to rest; there was an unpleasant crunching and scraping noise as the pitiful excuse for a fender hit the icy ridge at the edge of the road. Even as the car stopped, she screamed for good measure – maybe venting some of her boiling anger and frustration. She just wanted to reach the cabin for the holidays. To be tucked away in the wilderness, far from prying eyes, silly remarks and the haunting every day. Breathing deeply, she straightened the car – it was a good thing it was still on the road, and the ice had scraped the paint, but stayed firm, keeping her from sliding into the ditch. No other cars had put in an appearance this last hour, no doubt staying clear of this lonely road in such weather. She ran her chilly fingers through her hair, bouncing her head on the steering wheel a couple of times, then resuming her crawl northwards. 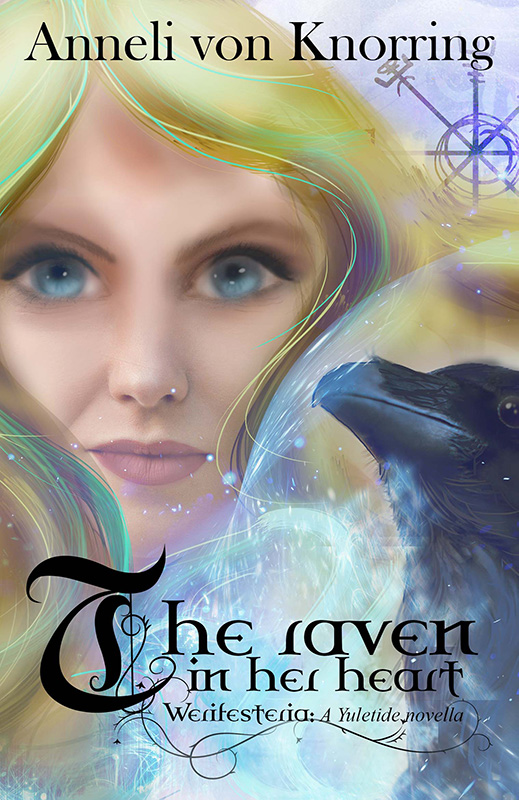 Meet the ravens. Hugr means thought, Mugr means memory. And Odin needed both. Which is your raven?

Venla escapes to her remote cabin to celebrate Christmas alone, grieving the shattered fragments of her life, but when old memories ignite her creative spirit, and she starts spinning and knitting, a raven comes to visit. On an impulsive whim she decides to let the raven into her heart, treating it as her friend, and it doesn’t take long before it brings her a magical gift. Only now it wants her to follow it into the woods. She thinks she must be crazy for even contemplating this, but the magic piques her interest. Not knowing it is the Elemental realm the raven has brought her to, Venla wields the little magic she can, to make her way.

But what will come of this crazy journey? Venla wasn’t sure what to expect, but she certainly wasn’t expecting her raven to transform into a beautiful prince, to discover a long-lost kingdom under a curse or to enjoy the most wonderful Yuletide she had ever had. And perhaps a ‘happy ever after’ too…

Inspired by ancient Scandinavian Yuletide traditions, the raven in Norse mythology, and Scandinavian folklore. Journey to encounter a host of mythical creatures in a heart-warming, creative Christmas adventure with transcendental depth.

The raven in her heart by Anneli von Knorring is a feel-good wintery tale where we explore the raven and its magic in Scandinavian folklore and myth, along with old Yuletide traditions.

Or get The raven in her heart on Amazon.